"Police said the offences began in September 2007 when a Chinese organised crime gang began to rent a number of industrial and residential premises in north Wales in Conwy, Colwyn Bay, Deganwy, Wrexham, Caernarfon, and Bangor."

Three men have been jailed for their part in running a cannabis factory in a rented commerial property, involving drugs worth £14m.
Twenty Chinese and Vietnamese people have already been convicted and sentenced to jail.
It brings to the end a major investigation, code-named Operation Jade.
North Wales Police found what is thought to be the largest cannabis farm in the UK - 11,276 plants in Bangor.
The haul was found in a converted building supplies store.
The hearing at Caernarfon Crown Court dealt with a property agent and builders involved in the premises used for cultivating the drugs.
Nicholas Pritchard from Y Felinheli, Gwynedd, a letting agent, who found properties for drug growing, was jailed for three-and-a-half years.
Twins Keith and Edward Reid, from Anglesey, builders who adapted them, received two-and-a-half years and 18 months respectively.
They were all convicted of conspiracy to produce cannabis at an earlier trial.
They were also convicted of money laundering by letting or converting buildings to be used as factories.
The judge Merfyn Hughes QC told the men: "It is well known that large scale cultivation of cannabis is a huge problem in England and Wales. 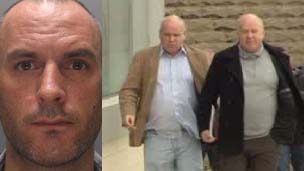 The judge told the men large-scale cultivation of cannabis was a huge problem
"Those who do it need assistance from people like you who are prepared to take a risk".
To Nicholas Pritchard he added: "You made available to this gang a number of properties including one where the largest crops ever discovered in the UK was found.".
He told Keith Reid he had the "skills to do the conversion work" and to his brother Edward Reid he said "you helped your brother and you also knew what was going on".
Last year the man behind one of the the largest cannabis operations in the UK was jailed for nine years.
Bo Xing He, 31, ran a series of cannabis factories across north Wales producing drugs with an estimated annual street value of almost £14m.
The factory was described as being of "Amazonian proportions".
In all 23 people have been convicted of cannabis production offences including 20 Chinese and three Vietnamese people.
Police said the offences began in September 2007 when a Chinese organised crime gang began to rent a number of industrial and residential premises in north Wales in Conwy, Colwyn Bay, Deganwy, Wrexham, Caernarfon, and Bangor.
Continue reading the main story

Source: North Wales Police
Local people said they had no idea what was going on at the site in Bangor.
"When we first moved in we noticed a smell but didn't think anything of it, then it turns out there was a huge cannabis factory next door," said Luke Mitchell.
"We didn't see anyone going in and out though because the entrance is around the corner to us," he added.
Gwilym Williams said he saw a white van being driven into the site by a Chinese man.
"He would step out of the van, unlock the chain and drive in, then put the chain back on and drive off (on the way out)," he said.
"I also saw people walking around at the bottom (of the yard) behind the locked gates.
Mr Williams said he did not realise until later either than a power cut was "deliberately" caused in the area, so that the factory could hook up "directly into the mains".
"Its the same everywhere, it's happening all over," he added.
As well as drugs, police seized £160,000 in cash and other high value items. Seven cars were also seized.
Posted by Unknown at 1:28 PM