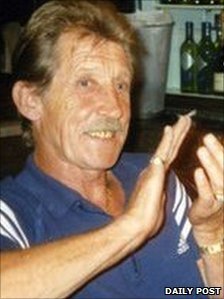 A man accused of murdering a retired antiques dealer said he took a knife to the house as a "joke".
Sacha Roberts, 19, told Mold Crown Court: "I thought should I take this as a joke? It was not anything serious".
Antoni Robinson, 61, was stabbed to death at his home in Old Colwyn, Conwy, last July.
Mr Roberts, Mr Robinson's daughter Ashleigh, 19, her boyfriend Gordon Harding, 20, and a girl of 16 all deny murder. The trial continues.
Mr Robinson, a former French polisher, died on 7 July in what the prosecution said was a family dispute about money, jewellery and property.
The prosecution said that some of the wounds were inflicted by Mr Harding.
Giving evidence in his defence, Mr Roberts said that he had not been into the bedroom that night and denied encouraging Mr Harding.
Mr Roberts, of Woodlands Road West, Colwyn Bay, said that he did not think that when Mr Harding went into the bedroom with a knife, he was going to injure Mr Robinson.
He claimed that Mr Harding took the knife off him in the hallway.
Mr Roberts said that when he had the knife in the hallway he did not have it for the purpose of injuring Mr Robinson.
He told the jury that he had picked up the knife before going to the bungalow where he believed the others were simply going to recover some jewellery from a safe.
He said that he had just tagged along, did not give any thought to the knife, and did not know if Mr Robinson would have been home that night or not.
Posted by Unknown at 12:23 PM