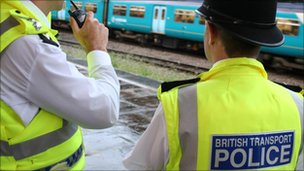 British Transport Police (BTP) have been clamping down on anti-social behaviour along the north Wales coast railway line.
Officers dealt with alleged offences including people urinating in public, possession of an offensive weapon and possession of drugs.
The four-day operation at stations between Bangor and Rhyl was aimed at making the railway feel safer.
Rail chiefs said they wanted passengers to tell them about any safety concerns.
Officers were deployed across the network, providing visible reassurance to members of the public who use the stations, particularly later in the evening.
"The initiative was a success but it's important that members of the local community continue to tell us about any concerns they have in their area, as this allows us to identify any problems and set about tackling them," said Insp Dai Davies.
Continue reading the main story

"Crime on the railways of north Wales remains low but our priority is to make sure that people who use the network are not only safe, but feel safe."
Ben Davies, the external liaison manager for Arriva Trains Wales, said he was pleased with the work transport police were doing to enhance existing high levels of passenger safety.
"The operation by BTP in north Wales was carried out following consultation with the railway network and the feedback we have already received from commuters has been very positive," he said.
Conwy community rail officer, Larry Davies, added: "This is a great example of joint working to ensure the railway remains a safe place for passengers."
Posted by Unknown at 12:18 PM