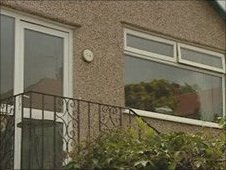 The bungalow in Colwyn Bay where Anthoni Robinson's body was found
Continue reading the main story
A 16-year-old girl from the Colwyn Bay area has become the fourth teenager to be charged with the murder of 61-year-old Anthoni David Robinson.
She will appear before Llandudno Magistrates' court on Wednesday.
Mr Robinson, a French polisher, died at his three-bedroom detached bungalow in Llanelian Road, Old Colwyn, in Conwy, last Wednesday.
Three other people, including the murdered man's daughter, have already been remanded in custody.
Ashleigh Robinson, the man's 18-year-old daughter, Sacha Roberts, 19 and Gorden Harding, 19, have been charged with his murder.
Posted by Unknown at 1:36 PM