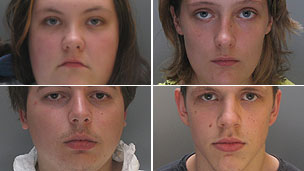 Two sisters and their boyfriends jailed for killing their father in his sleep have failed in a bid to have their jail terms reduced.
Ashleigh Robinson, 19, and her sister Holly, 16, were sentenced to life at Mold Crown Court in February for murdering Antoni Robinson.
Mr Robinson, 61, was stabbed to death at his home in Old Colwyn, Conwy.
Lawyers for the four went to London's Appeal Court but had their cases rejected by the Lord Chief Justice.
The sisters' boyfriends, Gorden Harding, 20, and Sacha Roberts, 19, were also jailed for life for murder.
The siblings' mother, Joanne Barr, 45, received four years after admitting attempting to pervert the course of justice by lying to the police.
Barr, of Colwyn Bay, also challenged her sentence, which her lawyers claimed was "manifestly excessive".
Commando-style blade

Alongiside their automatic life sentences, the four murderers received minimum terms for their crime - the minimum period they must serve before applying for parole.
Holly Robinson was given an 18-year minimum term, while Ashleigh, both of Colwyn Bay, received a 22-year minimum. Harding was ordered to serve at least 22 years and Roberts, both from Colwyn Bay, received a 20-year minimum.
Lawyers for all four went to London's Appeal Court challenging those terms, but had their cases rejected by the Lord Chief Justice, Lord Judge.
They claimed the trial judge adopted "too high a starting point" when setting their minimum terms.
The prosecution claimed during the trial that it was Harding who killed Mr Robinson using two knives in the process - one a commando-style blade. But the four were prosecuted on the basis of their "joint enterprise" in the knife attack.
Lord Judge, sitting with Lord Justice Leveson and Mr Justice Bean, rejected the appeals.
Posted by Unknown at 12:06 PM