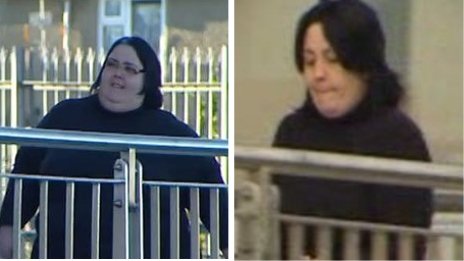 Two sisters who tried to claim £161m in VAT they had never paid have each been jailed for three-and-a-half years.
Andrea and Roberta Vaughan-Owen, of Colwyn Bay, Conwy, were also convicted of illegally claiming tens of thousands of pounds in benefits.
The pair, described as Laurel and Hardy figures by their defence, were called "serial fraudsters and shameless liars" by the judge at Caernarfon Crown Court.
The trial heard the pair lived "beyond the dreams of honest working people".
As well as their luxury home they rented out a second property, had private health care, paid for private education for Andrea Vaughan-Owen's children and expressed an interest in items such as a £315,000 Rolls Royce.
Continue reading the main story

The scale and variety of their criminal attempts was astonishing”

Simon De Kayne, assistant directorHM Revenue & Customs
Prosecutor Paul Taylor described the trial as a case "of our times and for our times".
"A case of, if you want it, you can have it, without doing any work to earn it," he told the jury as he outlined the case against the two sisters.
They were found guilty of nine frauds.
'Laurel and Hardy'

During the trial, the court was told that 42-year-old former Post Office worker Andrea Vaughan-Owen and Roberta, 37, got money from anyone they could, including banks, insurances companies and through state benefits.
The pair had both claimed incapacity benefits and working tax credits at the same time.
They were also accused of falsely registering companies for VAT purposes, and carrying out mortgage and insurance frauds.
But the main charge facing the two women was an attempt to reclaim £161m in VAT refunds for tax they had never paid in 2008.
The sisters claimed that the attempt to reclaim the massive VAT sum had been a mistake.
Their defence teams said they failed to understand the forms involved.
Lee Karu QC, defending Andrea Vaughan-Owen, said the claim was "nonsense, deluded, idiotic".
He said the sisters were more like Laurel and Hardy, rather than Bonnie and Clyde crime figures.
But the jury rejected their version of events and found them guilty of all nine charges.
Jailing the pair, Judge Niclas Parry said: "The jury has seen you for what you are - serial fraudsters, shameless liars, manipulative and calculating. You lived a lavish, greedy lifestyle at the expense of people who face real hardship."
Speaking after the sentencing, HM Revenue & Customs (HMRC) said the case served as a warning.
Simon De Kayne, assistant director with, HMRC said: "The scale and variety of their criminal attempts was astonishing but it wasn't enough for them and their greed led to the £161m VAT claim, and their downfall.
"Anyone tempted to cheat, swindle and defraud should be warned that we are examining claims more closely than ever before."
The HMRC said it would now be starting confiscation proceedings against the sisters, in a bid to recoup some of the money stolen in benefit fraud.
28 November 2011 Last updated at 17:12 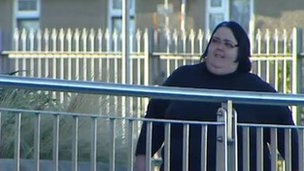 Two sisters' alleged fraudulent £161m VAT claim was "nonsense, deluded" and "idiotic" a jury has heard.
Andrea Vaughan-Owen, 42, and her sister Roberta, 37, both of Colwyn Bay deny working tax credit, insurance and mortgage frauds, as well as the attempted VAT fraud.
Mr Lee Karu QC told Caenarfon Crown Court they had been driven by ambition.
But Mr Karu said it was more "Laurel and Hardy of Caernarfon" than Bonnie and Clyde.
Judge Niclas Parry is expected to send the jury to consider their verdicts on Tuesday.
Mr Karu, defending Andrea Vaughan-Owen, said civil servants played the role of "Keystone Cops".
The prosecution accepted that the "left had didn't know what the right hand was doing".
He said nobody stepped in and no-one said "stop, this is rubbish what you are talking".
Continue reading the main story

Lee Karu QCdefending
In his closing speech to the jury Mr Karu said the sisters were driven by ambition.
"You throw a good mixture of delusion into it, what do you have - two ladies in the dock," he said.
He described the £161m VAT reclaim as "nonsense, deluded, idiotic".
"This is stupidity gone mad without somebody have a word with them and telling them 'this is nonsense.'"
'Frenetic interest'
He said the jury should clear his client if they thought she acted honestly "in a mixed up, muddled up way".
It was "much more the Laurel and Hardy of Caernarfon" than Bonnie and Clyde, he added.
Paul Taylor, prosecuting, said the two defendants had "led the high life for years without ever doing anything to deserve it".
It started as a £25,000-a-year tax credits fraud and when the "tap" was turned off they moved into VAT fraud and failed, he said.
"Hopefully systems will be strong enough to stop it happening again."
The sisters became used to "high living" and there was an "almost frenetic interest in money".
"We suggest these people really did expected to get a vast sum of money," he added.
Andrea Vaughan-Owen told the jury she and her sister did not understand the VAT form.
She said the form was filled after a judge, at a house repossession hearing, said they had two hours to complete it.
The prosecution pointed out that the hearing took place in October 2008 and the form was signed in December.
The defendant denied she was changing her evidence.
Judge Niclas Parry is expected to send the jury out to consider their verdict on Tuesday.

Colwyn Bay £161m VAT accused will not give evidence

One of two sisters accused of trying to reclaim £161m of VAT which they had never paid has decided not to give evidence in her defence.
Roberta Vaughan-Owen, 37, and her sister Andrea, 42, both of Colwyn Bay, Conwy, deny nine charges.
Judge Niclas Parry told the jury they could draw an adverse conclusion from the younger sister not going into the witness box if they considered it fair.
Meanwhile, the court heard that the elder sister was in hospital.
Judge Parry told the jury at Caernarfon Crown Court about Andrea Vaughan-Owen's health problems.
He said the court was waiting for the results of routine blood tests.
The jury heard that she had visited a hospital on Sunday night and had seen a GP on Monday.
'Not her fault'
On Tuesday, she returned to a hospital but was allowed to attend court to continue her evidence, but later went to hospital for a third time.
She could not be discharged, the court heard.
"That's clearly not her fault. It's not to be held against her," Judge Parry told the jury.
The prosecution has not cross-examined Andrea Vaughan-Owen.
When Judge Parry decided to move to Roberta Vaughan-Owen's case, her barrister Louis French said there would be no evidence.
The trial continues.
22 November 2011 Last updated at 22:25 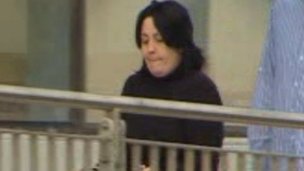 One of two sisters accused of trying to reclaim £161m of VAT they never paid has told a jury she was not being dishonest.
Andrea Vaughan-Owen, 42, of Colwyn Bay, told Caernarfon Crown Court she was under pressure due to a custody battle.
It is also claimed she and her sister Roberta, 37, claimed tens of thousands of pounds in benefits to which they were not entitled.
The sisters deny nine charges and the trial continues.
Taking to the stand the elder sister denied either of them had tried to obtain invoices from a number of companies so that they could use them to make the false reclaim of VAT.
She also denied prosecution claims she had made inquiries about a range of luxury items, including a Rolls Royce costing more than £200,000, because they thought millions of pounds would be paid to them.
VAT form
Continue reading the main story

Andrea Vaughan-Owen
Ms Vaughan-Owen said they had simply made the inquiry because they were planning a business offering weddings and the car would have been part of that service.
She told the jury at the time the VAT form was filled in and submitted she had been fighting over the custody of her children and there were also proceedings for the repossession of her home.
She said that neither she nor her sister were in the "correct state of mind" at the time.
"I didn't know what I was doing. The only thing I wanted was to get my children home for Christmas," she said.
When she was asked what was the purpose behind filling in the VAT form, she said: "I don't know, I don't know where my mind was".
The prosecution has alleged the sister used benefit money they were not entitled to to live a life "beyond the dreams of honest working people".
The court has heard they shared a £400,000 home in Colwyn Bay, rented out a second property, had private health care and paid for private education for Andrea's children.
The sisters deny furnishing false information by submitting a claim for a VAT refund of £161m in 2008, registering companies for VAT purposes and attempting to obtain invoices to substantiate a claim for a VAT repayment, insurance fraud, and being involved in fraudulent activity to obtain tax credit payments. 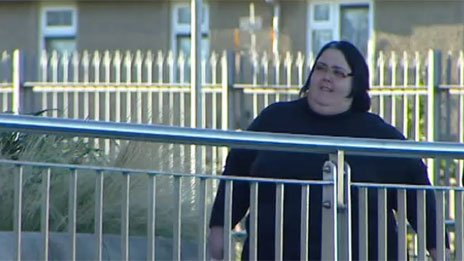 Two sisters accused of trying to claim back £161m in VAT which they had never paid say they had no intention of receiving cash from the Inland Revenue.
Roberta Vaughan-Owen, 37, and her sister Andrea, 42, both of Colwyn Bay, Conwy, told investigators in prepared statements they had made a mistake.
A jury heard that the sisters, who claimed to be recruitment consultants, did not understand the form.
They deny nine charges. The case at Caernarfon Crown Court continues.
The court was told the sisters thought it was vital to demonstrate the potential future turnover of their company.
The younger sister estimated the turnover after looking at the amount Liverpool Football Club charged for advertising - £75,000 for three minutes.
They are accused of frauds on working tax credit, mortgage and insurance before the bid to reclaim VAT.
Richard Branson
The court heard how the sisters had sought business mentoring from Richard Branson.
The Virgin boss had written to Andrea Vaughan-Owen, now 42, and her sister Roberta, 37, saying: "I was impressed with your letter and as someone who also suffers from dyslexia I understand how difficult it can be sometimes."
Continue reading the main story

It doesn't matter which barriers I face, I will try to overcome them”

Andrea Vaughan-Owen
In the 2003 letter, signed in his absence, he also urged them: "Don't give up. You can achieve anything if you put your mind to it."
Andrea Vaughan-Owen told the jury in evidence that she left school with an O-level in cookery.
She was ambitious but made no money from her business ideas.
"It's not in our nature to give up," she said, however.
She added :"It doesn't matter which barriers I face, I will try to overcome them."
She had been a post office worker until 2001 and last month married for the third time.
Asked by her QC Lee Karu about contacting Richard Branson, she said :"As you can see he wanted to help us."
Private education
The court has previously heard how the sisters lived "beyond the dreams of honest working people".
They shared a £400,000 home in Colwyn Bay, rented out a second property, paid for private education for Andrea Vaughan-Owen's children and expressed an interest in items such as a £315,000 Rolls Royce, the jury was told.
It was alleged the sisters got money from anyone they could, including banks, insurance companies and the state.
Both deny furnishing false information by submitting a claim for a VAT refund of £161m in 2008, registering companies for VAT purposes and attempting to obtain invoices to substantiate a claim for a VAT repayment, insurance fraud, and being involved in fraudulent activity to obtain tax credit payments.
Posted by Unknown at 10:49 AM