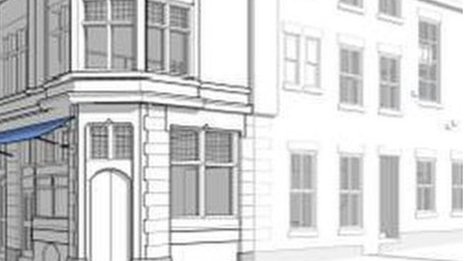 The plan is to "bring the building back to its former glory," says the charity Cais
Continue reading the main story

Town councillors have expressed their concern after a charity was given permission to open a training cafe for recovering drug users and alcoholics.
Colwyn Bay mayor Vivienne Perry said a centre to train former addicts would give the wrong impression of the town.
The charity, Cais, said it understood the apprehensions, but emphasised the cafe would train recovering addicts and would not be a treatment centre.
It won permission from Conwy council, despite town council opposition.
Continue reading the main story

On a positive side nobody has one answer to drug and alcohol problems so any organisation which tries to help, fair play to them, but you need to be sensitive to the local people too”

Vivienne PerryMayor, Colwyn Bay
It will be sited in a prominent town centre building which is currently a pub, which has had many uses, including as a shop and police station.
Mrs Perry said there were no "planning grounds as such" that could be used to oppose the proposal.
"There are plenty of charity shops too and whilst they do a good job yet another charity will give the impression of the town being down-at-heel."
As a charity the cafe could also claim rate relief, which would make it "unfair competition" to other businesses, she added.
She gave credit to the charity for helping people with drug and alcohol problems, but said sensitivity was also needed for local residents. 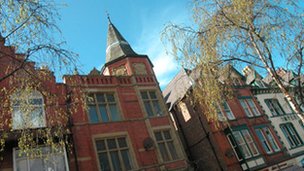 The training cafe should be open by summer 2013
"The site is currently run as a pub and as far as I know there is no trouble there, so my feeling is 'why fix it if it ain't broke?'," she added.
Cais chief executive Clive Wolfendale said the project would enhance a rundown Grade II listed building.
It is currently run as the Judge and Jury pub and the building has been for sale.
As well as the training cafe, the rest of the building would be restored, creating a training centre and venue upstairs and room for starter businesses, he added.
"We want to emphasise that it will not be a treatment facility and we already run a very successful Cafe Cais near the coach park in Llandudno.
"There will be up to 10 trainees at a time, and up to 20 staff, and there may have been some misunderstanding locally about what we are trying to do. We have worked hard to clarify this.
"We do a lot of work in employment training and although we understand people have concerns we see this as a considerable step forward for Colwyn Bay.
"We invite people to have a look at Llandudno to see there is no threat, that we are an asset," he added.
If all goes to plan the new training cafe will open in summer 2013.
Posted by Unknown at 10:34 AM