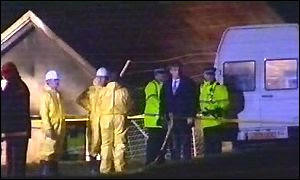 The shed was 100 yards from the town's fire station


An 11-year-old boy has been arrested in connection with the fire in Colwyn Bay which claimed the lives of two youths.The child has been bailed pending further inquiries.
Police have also confirmed that the two teenagers killed in the fire were a 13-year-old girl and 14-year-old boy. Firefighters wearing breathing apparatus were called to Eirias Park, Colwyn Bay, 100 yards from the town's fire station early on Tuesday evening and discovered the bodies of the two victims.
The names of the two children have not yet been released and their parents have been informed.
A north Wales police spokesman said: "The fire service attended a fire in the store room next to Eirias Sports Centre in Colwyn Bay
"The fire was extinguished and two young people were found to have died in tragic circumstances.
"The coroner has been informed and the investigation is continuing."
Detective Superintendent Alan Jones has taken charge of the investigation which is being treated as suspicious, however police are refusing to confirm whether fireworks were involved in the incident.
A home office pathologist arrived at the scene of the fire on Tuesday.
The scene of the accident just outside the boundary fence of the athletics arena was sealed off on Tuesday night.
Local councillor Chris Hughes speaking to BBC Radio Wales said: "Our heart goes out to the families.
"We need to find out how this happened, why it happened and try to ensure that such incident's do not happen again."
Police are appealing for any witnesses who may have been in the area of Eirias Park between 1600 and 1630BST on Tuesday to contact them at Colwyn Bay Police Station on 01492 511305.
Posted by Unknown at 9:36 AM