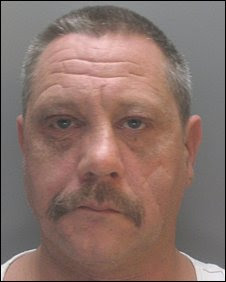 Three members of the Outlaws motorcycle group have been jailed for offences involving drugs worth £20,000.
The group's European president Stuart Ian Dawson, 46, of Old Colwyn, Conwy, received a five-year sentence after being convicted of two drugs offences.
"Close aide" Adrian Sheriff, 46, and Michael Byrne, 50, both of Abergele, Conwy, were given four and five years.
North Wales Police said the sentences proved its ability to take on organised crime groups.
Four other men received prison terms at Caernarfon Crown Court varying between 18 months and two-and-a-half years for their roles.
The arrests followed the discovery of amphetamines when two men from south Wales travelled to North Wales.
The prosecution had alleged that the north Wales branch of the Outlaws at Colwyn Bay was a drugs distribution centre. 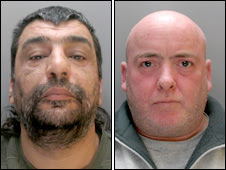 Adrian John Sheriff and Michael Byrne were also jailed
Ackowledging that the Outlaws motorcycle organisation was "perfectly lawful", Judge Merfyn Hughes, QC, told Dawson: "You used your role as European president to further your own criminal activity.
"In doing so you have brought that organisation into disrepute, conducting an organised, wholesale and commercial drug supply."
Det Ch Insp Gerwyn Lloyd welcomed the sentences.
"This demonstrates that we are more than capable of taking on organised crime groups of this type," he said.
"Those convicted are a small minority of the public who consider themselves to be above the law. We will use all the available policing tactics to bring these people to justice."
North Wales Police said it would be making an application to the courts for a serious crime prevention order (SCPO) against Dawson and Sheriff.
Gang leaders

SCPOs are designed to disrupt the activities of organised crime gang leaders, with any breach of such an order resulting in criminal proceedings.
The move would make the force one of the first in the UK to take such steps.
A financial investigation would also begin, said police.
Posted by Unknown at 1:44 PM