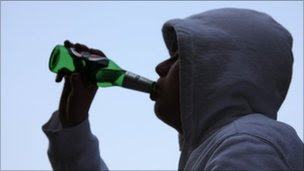 Police have been given extra powers to combat anti-social behaviour in a Conwy town.
A six-month dispersal order came into force at 0600 BST on Monday in Colwyn Bay, where there have been complaints about groups fighting and drinking.
It enables police to order groups of two or more people to leave designated areas, and to ban groups who do not live there from returning.
Failure to comply could result in a six-month jail term and a £2,500 fine.
The areas covered include: Abergele Road, Rhiw Road, Park Road, Nant y Glyn Road, Douglas Road, Rhiw Bank Avenue, Meirioin Gardens, Victor Road, Agnes Grove, Grove Park, The Close and the Shell Garage on Abergele Road.
Inspector Ian Verburg said: "The dispersal order has been introduced to reduce anti-social behaviour and make the public feel safe.
"The vast majority of members of the public in Colwyn Bay are law abiding people and this order is a preventative and tactical measure for the police to use to disrupt the minority who are intent on causing harassment, alarm and distress to others.
"It will be used fairly and enforced where the police have cause to believe groups are congregating with intent to cause anti-social behaviour."
North Wales Police said incidents had resulted in members of the public being "harassed, alarmed or distressed".
Anyone who witnesses anti social behaviour is urged to contact Colwyn Bay Police Station on 101 (if in Wales), 0845 6071001 (Welsh language), or 0845 6071002 (English language).
Posted by Unknown at 10:51 AM