Caravan owner wakes up during tow by thieves 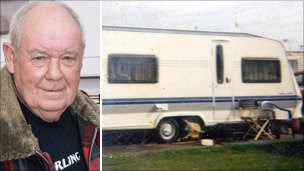 William Roberts was asleep in the caravan when it was stolen from his drive
A pensioner has told how he went to sleep in his caravan and woke up to find it being towed away by thieves.
Llandudno magistrates heard William Roberts, 70, of Towyn, Conwy, escaped only after it had stopped at a lay by.
Benjamin Moorhead, 29, and girlfriend Chantelle Kinnish, 24, of Morecambe, Lancashire were convicted of theft.
Moorhead said he had been offered £100 by a man he was in jail with to move the caravan and thought it was his brother's. Sentencing is on Wednesday.
Mr Roberts, who said he had drunk more than half a bottle of whisky before going to bed, told the court that at first thought he was dreaming but then fell out of bed.
He said: "I tried to get up and realised it was moving."
The court was told the £17,000 caravan knocked over a gatepost as it was was taken from his driveway, towed by a Ford van driven by Moorhead.
When Moorhead and girlfriend pulled up nearly four miles away in a lay-by at Llanddulas, near Colwyn Bay, Mr Roberts made his escape, the court heard.
Posted by Unknown at 1:35 PM