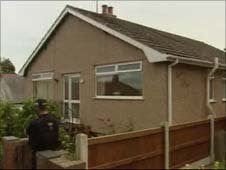 The bungalow in Colwyn Bay where Antoni Robinson's body was found
Continue reading the main story
A third teenager has been charged with the murder of a 61-year-old French polisher whose body was found in his bungalow in Colwyn Bay, Conwy
Sacha Roberts, 19, from the town will appear in a Llandudno court on Monday over the murder of Antoni David Robinson.
His body was found in the property on Llanelian Road last Wednesday.
Ashleigh Robinson, his 18-year-old daughter, and Gorden Harding, 19, have already been remanded in custody.
The pair who are both of no fixed address are to appear before Caernarfon Crown Court on 16 July.
9 July 2010 Last updated at 11:28

The bungalow in Colwyn Bay where Antoni Robinson's body was found
Continue reading the main story
The 18-year-old daughter of a man has appeared in court with another teenager charged with his murder.
Ashleigh Robinson and Gorden Harding, 19, have been jointly charged with killing French polisher Antoni David Robinson, 61, in Colwyn Bay, Conwy.
Mr Robinson's body was found in his bungalow on Llanelian Road early on Wednesday.
The teenagers, who told magistrates at Llandudno they had no fixed address, were remanded in custody.
They will appear next before Caernarfon Crown Court on 16 July.
There was no application for bail.
8 July 2010 Last updated at 19:20

The bungalow on Llanelian Road, Old Colwyn, where Mr Robinson was found
Continue reading the main story
A teenager has been charged with murdering a 61-year-old man in Old Colwyn, near Colwyn Bay.
The body of Anthoni David Robinson was found in his bungalow in the town, in Conwy county, in the early hours of Wednesday morning.
Gorden William Harding, 19, from Old Colwyn, is due to appear at Llandudno Magistrates' Court on Friday morning.
An 18-year-old woman is still being questioned by police over the death.
7 July 2010 Last updated at 11:55

Murder arrest after body is found at Colwyn Bay house 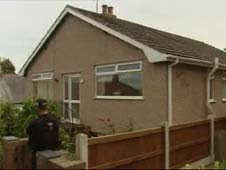 A policeman stands outside the house in Llanelian Road
Continue reading the main story
A 19-year-old man has been arrested on suspicion of murder after a body was found at a bungalow.
Police were called to an address at Llaneilian Road in Colwyn Bay, Conwy county, in the early hours of Wednesday.
Officers discovered the body of a 61-year-old man at the three-bed property.
A man who was living at the house was arrested on suspicion of murder and is being detained at St Asaph police station.
North Wales Police said a number of witnesses were assisting officers with their inquiries.
A post mortem examination will be carried out on Wednesday morning.
Posted by Unknown at 1:39 PM