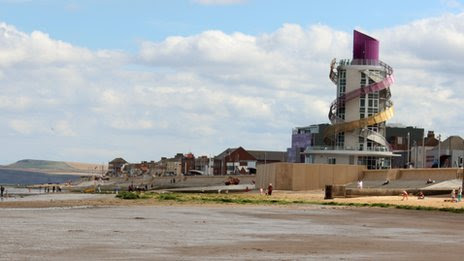 The Redcar Beacon cost £1.6m and is home to shops, a cafe and viewing platform
Continue reading the main story

A seaside tower dubbed the 'vertical pier' and a London budget hotel have been named among Britain's ugliest buildings by an industry magazine.
The Redcar Beacon and The Premier Inn, Lambeth, are on a shortlist of six projects announced by Building Design magazine.
Its annual Carbuncle Cup competition claims to recognise the worst architectural projects.
The winner will be announced on 30 August.
A water sports centre in Colwyn Bay, Wales, also selected, is known as "the dumpster" by locals, the magazine said.
Student accommodation developments in Islington and an apartment block named Avant Garde on Bethnal Green Road, London were also nominated by members of the public.
The Castle Mill student housing scheme in Oxford completes the shortlist - the most nominated project in the history of the Carbuncle Cup, the magazine said. 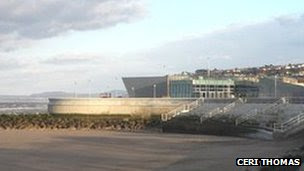 The Porth Eirias watersports centre cost £5m
A campaign group opposed to the development at Port Meadow, by the River Thames, has been granted a hearing to examine the case for a judicial review into the decision to build the flats.
Redcar's Beacon, meanwhile, which opened in March, forms the centrepiece of a £75m regeneration programme in the Teesside town.
More than 100,000 people visited the 80ft (24m tower) in the first four months it was open.
Some critics had called for a traditional pier to be built instead.
Posted by Unknown at 10:20 AM